In the kingdom of Kale, long before the gods came to dwell among men, and the waters of the beautiful lake graced every home, there were those who knew what an abomination was. These were the men and women who could look into your eyes and behold the lives of your great grandchildren. No one was allowed to visit these men and women. If your farm was dying and your children wandering even then you could not visit them. They only answered the call of the gods and it is because of one of these gods that I am here today.

Her name, Lando, meaning the fair skinned one. She was the sun and the moon, an ever present beauty at dawn and dusk. Those who beheld her say that she had the eyes that could sink nations, drown fishermen and uproot trees. My people are known to pepper their words. No one has ever held up a picture to my face to prove these things and until then I will agree that she was simply a woman and to any man, a woman is a thing of beauty if he’s not lain beside her.

Lando was the first god to arrive in the kingdom of Kale. It was the season of the full moon where the fishermen prayed to the gods to help them catch some fish, if not a net full at least a handful so they could feed their families. They loved the sun and feared the moon. When the moon was in her full glory, all the fish would never come to the surface and the deeper they went into the lake, the less certain they were of making it back to the shore.

It was in one of such seasons, at the break of dawn when Lando appeared on the shore. The people say that they heard beautiful singing and when their ears led their legs they found themselves before this beauty whose skin glowed like the sun.

When she finished singing her song, she rose and her feet led the way to the King’s home. No one followed her that morning. Later in the evening, the King summoned the people and they feasted on the delicacies prepared by Lando as she sang into the night. For many harvests and seasons, the kingdom of Kale prospered until one evening when the skies could not help but lash out in anger and after the storm, walked in Dichol.

Whereas Lando was sunshine, Dichol was darkness. She was as dark as the night and those who picked a lump of soil from the earth claimed that even that was nothing compared to the god, Dichol. Dichol too upon arrival made her way to the King’s home and she was welcomed by the Queen. It is often said that the Queen had the heart of the Lake, wicked and wild, in everything she did. The people whisper their assumptions because rumor has it that wicked Queen’s spirit still roams the earth ready to strike down anyone who speaks ill of her. Now, they say that she was jealous of the attention the people of Kale were giving Lando and as such, she cried to the lake to send forth Lando’s rival to the land. The Lake being the mother of all souls, mortal and immortal, heard her cries and sent Dichol.

No one has ever described Dichol as they did with Lando and it pains me that they only referred to her as “dark night.” 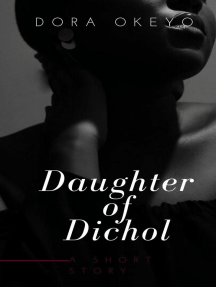 Daughter of Dichol is a short story I submitted for the Afritondo Short Story Prize. So, since it didn’t make the cut, I thought why not share it here 🙂