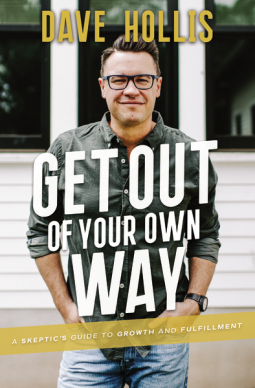 Oh, I loved this book! Dave truly went there, he had the conversation that he didn’t want to and out of it wrote this book that called out most of the lies we tell ourselves.

When Dave Hollis’s wife, Rachel, began writing her #1 New York Times bestselling book, Girl, Wash Your Face, he bristled at her transparency and her willingness to talk about such intimate details of their life. But when a looming career funk, a growing drinking problem, and a challenging trek through therapy battered the Disney executive and father of four, Dave began to realize he was letting untruths about himself dictate his life. As he sank to the bottom of his valley, he had to make a choice. Would he push himself out of his comfort zone to become the best man he was capable of being, or would he play it safe and settle for mediocrity?

In Get Out of Your Own Way,Dave tackles topics he once found it difficult to be honest about, things like his struggles with alcohol, problems in his marriage, and his insecurities about being a dad. Dave helps us see our own journeys more clearly as he unpacks the lies he once believed—such as “I Have to Have It All Together,” “Failure Means You’re Weak,” and “If They Doesn’t Need Me, Will They Still Want Me?”—and reveals the tools that helped him change his life.

My take on it:

It does not matter that his wife is also a great writer- calling out BS in women and the lies society indoctrinates in us- or that he’s writing from his life experiences as a man- this book is a great read because from the very beginning he calls out the truth on self-help books. He says “self-help is the tie between growth and fulfillment.”

He drives the point home “in order to grow, you need to put in the work and learn to kick the lies putting limits on who and what you can be.”

He calls you out before you give excuses. You’ve got to put in the work, like he learned to and continue doing so if you’re to get any better.

Some pointers that stood out for me and I am currently working on during this period of isolation are:

Commit to the habits that fuel you.

Success can mess up with you just as much as failure.

Roll up your sleeves and do the work

Redefine how you measure success in your work

A huge thank you to the publisher for granting me an eARC, this book will appeal to everyone who’s ever felt like they aren’t enough and the tone of writing makes it a book you can read anywhere at any time, with take away points for reflection.

Get a copy:  from Amazon