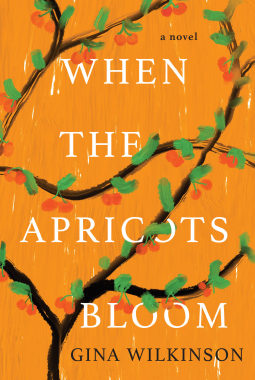 Inspired by her own experiences stationed in Baghdad during Saddam Hussein’s rule, former foreign correspondent Gina Wilkinson’s evocative, suspenseful debut is told through the eyes of three very different women in Iraq at the turn of the millennium. A secretary, an artist and a diplomat’s wife, each must confront the complexities of trust, friendship, and motherhood under the rule of a dictator and his ruthless secret police…

In a perfect world, we could wait until the apricots bloom. Alas, the world is not perfect.

I saw this book on Netgalley and I had to request the publisher to read it because I was drawn to two things on the blurb: the fact that it’s set in Iraq during Saddam’s reign and the second aspect involved three different women. I asked myself what could a secretary, an artist and a diplomat’s wife have in common?

The story delves into the need for control by Saddam’s government, enforcing rules and corrupt police officers who demand that people do as they ask and if they do not, someone close to them or simply the people themselves disappear. The diplomats are also spied on by the Iraqis and the police visit anytime to glean information from the Iraqi spies- mostly in their homes, reminding them of the hold they have on them.

As the story begins, the author introduces us to both Huda and Rania, as young girls who take a blood oath to always protect each other’s secrets. As the story unravels, Huda comes off as the one who would go to any lengths to protect her family, including blackmailing her former childhood friend, Rania, and it does not help that she is also working for the police as an informant- giving details of Ally’s life.

A secret is like a dove, once it leaves your hand, it flies where it wants.

In reading this book, Huda was ice cold towards Rania and you could not help but wish that she could take a step back and soften towards her friend. Rania on the other hand is the artist, both wise and calm and she knows when to push and when to refrain. What I found oddly satisfying was that both women had suffered the loss of their loved ones at the turn of Saddam’s reign, yet their approach towards this loss was utterly different. Rania was warm towards people while Huda was aloof. Her words could slice you open.

Ally, the diplomat’s wife, is noted as ‘housewife’ on her Australian passport- but her coming to Baghdad is not just to support her husband, Tom, but it’s to find out about her mother- a child’s last hope of trying to put together the pieces of her mother’s life. She starts asking questions and soon learns that in a dictatorship, your words could make you or kill you, literally.

I love proverbs and sayings and I came across many of them in this book, some that stood out are:

A lie takes only one moment to leave the mouth, but it can linger to the grave.

Sorrow sweeps everything out of your house violently, so that joy has space to enter.

A friend knows better than an enemy how to do you harm.

The story of these three women is both nostalgic as it is heartbreaking and it reminded me of the countless number of lives that are affected in war-torn countries, countries facing civil unrest, and more so dictatorships.

This book is also beautifully written that you cannot help but urge Huda, Rania and Ally on, in their quest and their friendship.

I’ve been a nomad from the age of six-months, when my parents packed me and our Siamese cat into an old Renault and set off for a remote gold-mining town in Australia’s Nullarbor desert. Since then I’ve circumnavigated the globe many times. As a foreign correspondent, I reported from some of the globe’s most intriguing and dangerous places for renowned broadcasters such as the BBC, NPR, and the ABC.