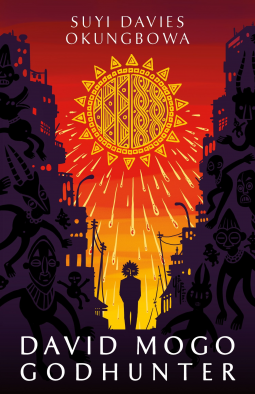 David Mogo is a demigod. His mother is the god of war and chaos and his father, well, he was just a common man- a mortal which is why he hunts gods and godlings, because his essence can sense their presence. And also their presence in Lagos causes nothing but chaos for human beings and he is not pleased about it, not one bit.

About the book: The gods have fallen to earth in their thousands, and chaos reigns. Though broken and leaderless, the city endures. David Mogo, demigod and godhunter, has one task: capture two of the most powerful gods in the city and deliver them to the wizard gangster Lukmon Ajala. No problem, right?

But David’s not perfect: he is conflicted about a host of things that go as far as his birth, being abandoned by his mother, always feeling like he doesn’t belong and now the fact that he’s got high gods after him, seeking to kill him.

It’s an interesting read and David is vivid in his description of what he’s feeling just as he is rash in fighting. For example he says at some point during a fight “Tonight though, it’s because my body aches like I was built by angry carpenters.”

Like in any book, there’s a likelihood that you’ll be taken in by a character or characters and in this book, my favorite character was Papa Udi also known as Payu. He speaks Pidgin and he doesn’t say much, but you realize that he’s the one David listens to and respects the most. He is also the one that David does not want to let down and that kind of pressure does a number on David’s focus in fighting the gods.

Payu shakes his head. “No, no, no. Na die two of una dey and I cannot follow you for such a thing. Good luck if you wan go die, but you cannot drag me along. David, no. I say no. No!”

Like in Chapter Twenty Two, Papa Udi chastises Kehinde when he says:

“You for no talk am like that,” and adds “Wise god my bumbum.”

What the author succeeds in is in thrusting you into a world of chaos, magic, anger and vengeance whilst serving it through Pidgin, and highlighting aspects that are indeed akin to Nigeria and the culture of some tribes therein. It’s also a hilarious read because between the back and forth of Payu and David you cannot help but appreciate their relationship, one as the nurturer and the other son or grandson.

I saw this book on the Netgalley dashboard and I had to read it, because if it’s by an African author, I’m interested-period! It’s been a fun read, there are bits and pieces I relate to and my only sad point is that I cannot quote all of Payu’s lines (yeah, there’s that disclaimer to Advance Readers).

About the author: Suyi Davies Okungbowa is a Nigerian writer of science fiction, dark and contemporary fantasy. His short fiction and essays have appeared in Lightspeed, Fireside, Podcastle, The Dark, Ozy, Omenana and other magazines and anthologies. His urban fantasy novel about gods in Lagos is forthcoming in 2019. Visit the author’s website or tweet at him at @IAmSuyiDavies.